Resource constraint networks such as sensor networks and Delay Tolerant Networks (DTNs) are deployed in challenged environments using potentially mobile devices with limited resources. They are emerging as a promising technology in areas such as Internet of Things and with applications such as wildlife management, military surveillance, underwater networks, and vehicular networks. Recent focus on these networks has naturally generated efforts to analytically understand them. Our research answers questions of the following nature: What parameters of the mobility model affect DTNs performance? How does finite buffer sizes affect the latency and the network throughput. The research develops novel approaches in performance modeling, drawing out key ideas from Markov-chain- and queuing- theory. The research also attempts to arrive at a novel framework which is capable of capturing key network characteristics under practical constraints such as finite bandwidth, random contact durations, and finite node buffers. Key performance measures such as latency, throughput and reliability are explored for various communication scenarios, routing protocols, network coding and buffer management schemes as well as adversarial settings.

The specific research projects are as follows:

Disruption tolerant networks (DTNs), also referred to as delay-tolerant networks, are special type of mobile ad-hoc networks. They often used when there is no backbone infrastructure and hence have applications in military networks, vehicular networks, and providing basic network services to rural areas. Such networks employ devices that are constrained by finite storage capacities, limited computational capabilities, and low battery lifetimes. Hence, they are also referred to as Challenged Networks.

Naturally, there is growing interest in the research community to evolve new mathematical models that help in understanding the behavior of DTNs. A complete understanding of this new class of networks requires answering the following questions: 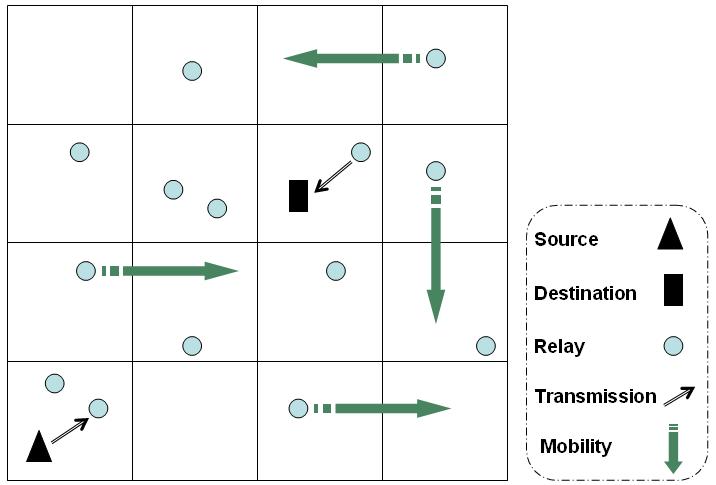 In particular we study:

Today, convergence of sensor technologies, communications, and computing has emerged to provide the potential to overcome the barriers of time, scale, and environment. Distributed sensor networks are becoming a feasible solution to various data collection applications such as military battlefields, scientific experimentation sites, medical instrumentation and domestic appliances. Typical sensor networks are often infrastructure-less and may include hundreds to several thousands of randomly scattered sensor nodes that are constrained in physical size, available energy, computational ability and transmission range. The full potential of sensor networks has yet to be realized as a result of design challenges in the sensor technology and related networking issues. Professor Fekri and his research group are investigating the fundamental limits and techniques for processing and distribution of information in wireless sensor networks. In particular we are interested in reliable and secure communication and distributed processing in the presence of constraints such as limited energy, lossy channels, interference, latency and throughput, and adversary attacks. In particular, we study the following problems:

In networks, packets may have to be relayed through a series of intermediate nodes (i.e. routers). In such conditions, packets may have to be stored at these relay nodes for transmission at a later time for various reasons such as full buffers, packet loss, or scheduling. If an unlimited buffer space is available, the intermediate nodes need not have to reject or drop the arriving packets. However, in practice, buffers are limited in size. Although increasing the buffer space tends to minimize packet drops and increase the link utilization, large buffers have an adverse effect on packet latency. Further, using larger buffer sizes at intermediate nodes would result in secondary practical issues such as on-chip board space and increased memory-access latency. Consequently, a simple but fundamental question is the following: what is the minimum buffer requirement for each router given certain constraints on the throughput and queuing delay?

The objective of the this research is to develop a general framework for studying the latency and fundamental limits on the information carrying capacity of different networks (e.g., wired/wireless, mobile/fixed topology) in a finite-buffer setting for various coding, source-traffic, scheduling and communication scenarios. In particular, given the communication protocols and network settings, we study the occupancy distribution of buffers by modeling the states of the network with Markov chains of appropriate size and complexity. The buffer occupancy distributions can then be used to determine information delay and its interplay with network throughput. We believe that our developed framework can help to understand, design, and analyze practical delay constraint networks, and to design more suitable protocols for real-time applications with high speed (finite-buffer) routers.