There has been a rapidly growing interest in studying biomarkers. Biomarkers are shown to have applications in the disease detection (e.g., cancer, heart disease, infection, epilepsy, Alzheimer, aging, etc). A biomarker may also be used to monitor how well the body responds to a treatment for a disease or condition. By definition, a biomarker is a characteristic that is objectively measured and evaluated as an indicator of normal biological processes, pathogenic (i.e., causing disease) processes or pharmacological responses to a therapeutic intervention.

Synthetic biology harnesses genetic engineering and computational solutions to redesign useful biological products. Living cells with genetically-encoded sensors engage in sensing, processing, and actuation based on environmental stimuli. Inspired by one of the long-term goals of synthetic biology to reliably engineer biological systems that perform human-defined functions such as sensing and monitoring, we propose to investigate several problems including identification of the biomarkers for each target disease, studying fundamental limits and develop algorithms for biomarker sensing via a group of engineered cells (i.e., a biosensor array). We study the biomarker sensing problem with potential applications in disease detection. We establish the rate-distortion theory for biomarker sensing and investigate as to how distortion can be minimized via an optimal quantizer. We also study sensor cell arrays in which sensing redundancy is achieved by using multiple sensors to measure several biomarker inputs simultaneously. We develop algorithms to solve the disease detection problem using the biomarkers measurements. 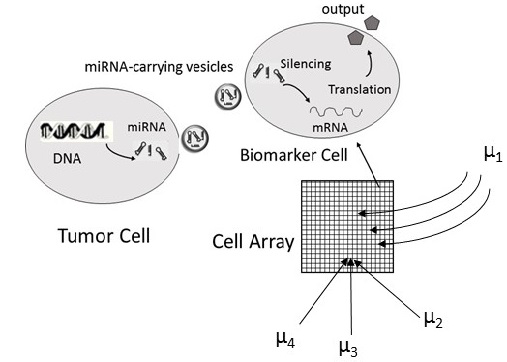 MicroRNAs are small non-coding RNA molecules that play a key role in inter-cell communication in humans. Irregular patterns over specific miRNAs are already linked to certain types of cancer and cardiac diseases. Hence, miRNA can serve as useful biomarkers of physiological state (disease), and some studies suggest circulating miRNAs may be used as a tool for therapeutic treatments as well. Synthetic biologists have already engineered biosensors with messenger RNA (i.e., mRNA) circuits that respond to miRNAs. The MicroRNAs influence cell gene expression by silencing the protein translation of mRNAs inside the cell. Prof. Fekri’s research proposes a small array of mRNA sensors that measures the concentration of hundreds of miRNAs which can then be used in a signal processing and machine learning algorithms to detect the target diseases. In particular, the research plans to develop a framework to identify the proper biomarkers for each disease, study the sensing problem, and develop the detection algorithms.